The Directors of Sylvester & Browne Lawyers wish a very merry Christmas and prosperous new year to all of our clients (& their families) and to those who have provided assistance to the firm throughout 2012. We are excited about what 2013 holds for our existing clients including the successful culmination of several large cases.

We hope that you enjoy the holiday break and return to work stress-free in 2013.

Below are a few photos from the AHA NSW Golf Day held at Strathfield GC last Tuesday the 10th of December 2012. More photos to follow over the next week. 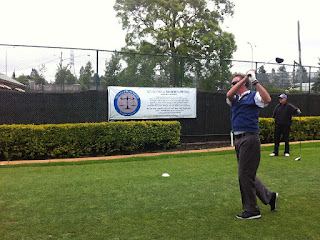 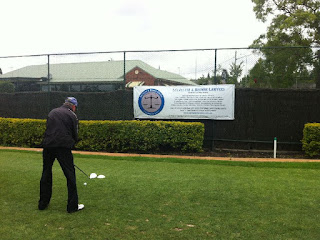 Sylvester and Browne Lawyers are proud to announce that they will sponsor the NSW Australian Hotels Association GC (NSW Branch) Golf Day on Tuesday the 11th of December 2012 at Strathfield Golf Club. The event will be a shotgun start commencing at 12pm. The event will be followed by the annual Xmas dinner at 6pm.

"We are very proud to be associated with the NSW AHA Golf Club for this years final event before Xmas" said Mr Stuart Browne, Director of Sylvester & Browne Lawyers. "We are really looking forward to the day and hope to be involved for many years to come".

There are a few spots still available, so if you are interested in attending let us know. Hope to see you there.

Legal quote of the month

An unjust law is itself a species of violence. Arrest for its breach is more so.
Mahatma Gandhi
Posted by David Sylvester at 2:03 AM No comments:

This week we are proud to report that we successfully achieved a section 10(1)(b) dismissal and conditional discharge (under the Crimes (Sentencing Procedure) Act 1999) for a client charged with Supply and Possession of Ecstacy. In our view, the sentence was entirely appropriate, especially considering the young age of the client, his future prospects and lack of antecedents. As acknowledged by the investigating Police, upon arrest the client admitted his wrongdoing, accepted full responsability for his actions and assisted Police with their inquiries. The client was certainly aware that his actions had been foolhardy and had the potential to land him in gaol for a considerable period of time. Thankfully, he is now free to continue his studies and hopefully someday secure his dream job.

Notwithstanding that our client pleaded guilty to the offences, the case also raised some interesting issues in relation to Police arrests and their associated powers under the Law Enforcement (Powers and Responsibilities)  Act 2002. (LEPRA)

Whilst many in government and society generally appear to be committed towards providing Police officers with the powers necessary to investigate, arrest and place offenders before the courts, we as citizens must strive to ensure that the powers given to Police to achieve these goals are not misused or 'bent' via noble-cause policing. This case in particular served to highlight the fact that Police sometimes use their powers to search (eg. under s. 21 of LEPRA) and arrest persons (under s.99 of LEPRA) in an improper manner. For example, a Police officer must not attempt to search a citizen (without warrant) unless the officer suspects "on reasonable grounds" that the person has something in his possession or under his control that has been stolen or otherwise unlawfully obtained OR anything used or intended to be used in connection with the commission of a relevant offence OR a dangerous article in a public place OR a prohibited plant or drug. The mere fact that it is 4am in the morning and the approaching Police are outnumbered is NOT sufficient to stop search and detain or arrest a group of male persons walking in the vicinity of a shopping centre. The Police must suspect on reasonable grounds that one of the above circumstances is applicable before they deprive people of their liberty. This is a cornerstone of what we as members of society expect from the law and those who enforce it. Stopping, searching and detaining youths simply because the Police are outnumbered is both illegal and unjustified. If we acquiesce to the erosion of our civil liberties in this fashion, it is a just a matter of time before this type of Police behaviour becomes commonplace and accepted. I'm not saying for a minute that Police should be put into situations that may be unsafe. However, Police officers must work within the constraints of their powers as outlined in the statutes, otherwise the freedoms that we enjoy as a society will disappear.
Posted by David Sylvester at 11:16 PM 1 comment:

By Clyde Mooney
Industry concerns have surfaced following the NSW Premier Barry O'Farrell's announcement on Tuesday of a raft of measures to tackle problems in the Kings Cross precinct.
The suite of initiatives includes an increased police presence and powers and improvements in public transport, but most significantly includes a precinct-wide linked ID-scanning system.
Sylvester & Browne Lawyers principal David Sylvester told TheShout the onus is increasingly being put on the operators to take on the burden of law enforcement.
"The cost issue doesn't resonate well with critics, but venues have already put in a number of initiatives to address this problem – how much more will they be expected to do?
"Each machine needs an operator, as well as additional security to protect them. The costs are significant."
Sylvester's firm represents a number of hospitality clients in the Oxford Street and CBD precincts, and he says these clients are "far from happy about the ramifications of such proposals and their potential to affect other city venues".
TheShout's story on Wednesday quoted support by the AHA (NSW) for the new measures, with CEO Paul Nicolaou describing them as "practical measures that directly target those people doing the wrong thing, not the 99.9 per cent of people who come to the Cross for a good time".
An AHA spokesperson yesterday reaffirmed this position, telling TheShout that "discussions have been held regularly with the nine AHA members in the Cross over the last few weeks".
The spokesperson declined to speculate on the proposed ID-scanning system at this stage.
Posted by David Sylvester at 6:49 PM No comments:

Legal Quote of the Month

Justice may be blind, but she has very sophisticated listening devices. ~Edgar Argo
Posted by David Sylvester at 7:44 PM No comments:

Network 10 (Sydney) reporter John Hill investigates the failure of NSW Police management to adequately protect it's own Police officers from toxic chemicals contained in the main Sydney Police Centre - Drug Exhibit Vault. See the YouTube video clip below where John Hill reveals that a similar exposure to toxic chemicals occurred at the Gosford Police Station drug exhibit room in 2007. As a result of that incident, a large number of Police were classified as Hurt on Duty and at least two officers have been medically discharged from the Police as a direct result of that particular incident. Interestingly, shortly after the Gosford Police Station incident, NSW Police management made a number of changes to the Gosford Police Station drug exhibit area including the installation of a large exhaust fan (see video). The revelation of the Gosford toxic exposure makes a mockery of the claims by NSW Police Management that they are not liable for the injuries of our client Mr McGrath some two years after the first event. Mr McGrath and several other Police look forward to the determination of the workplace health and safety breach lodged by WorkCover against the NSW Police. If you are a Police officer who has been exposed to toxic chemicals or injured as a result of working in a NSW Police Drug Exhibit room, please feel free to contact the undersigned to discuss your legal options.

Posted by David Sylvester at 10:33 PM No comments:

Legal Quote of the Month

Laws are like sausages. It's better not to see them being made.

All licensees and owners should be aware that the NSW Government’s 'Three Strikes' scheme, which is aimed at rogue operators who place staff, community and patrons at risk by permitting intoxication, violence or illicit drug use on their premises, came into effect on 1 January 2012.
The OLGR recommend that venue operators visit the website of the Office of Liquor, Gaming & Racing (OLGR) which provides updated information about the 'Three Strikes' scheme including a new fact sheet listing the types of offences that might trigger a strike. The link is www.olgr.nsw.gov.au/liquor_3_strikes.asp.
If you have any questions, don't hesitate to contact our office on (02) 8251 0096
More updates coming soon!
Posted by David Sylvester at 5:01 PM No comments: