Articles in May 2014 edition of Australian Hotelier

Today I have posted a copy of two articles published in this month's (May 2014) edition of Australian Hotelier magazine. If you are have trouble reading the articles, simply right click the document and save to your desktop to view a larger version of the image.

The first article relates to insurance and compliance issues facing the owners/managers of hotels/pubs/bars/nightclubs.

Should licensees or venue managers have any queries regarding any of the articles, please feel free to contact me at our Sydney office on (02) 8251 0096. 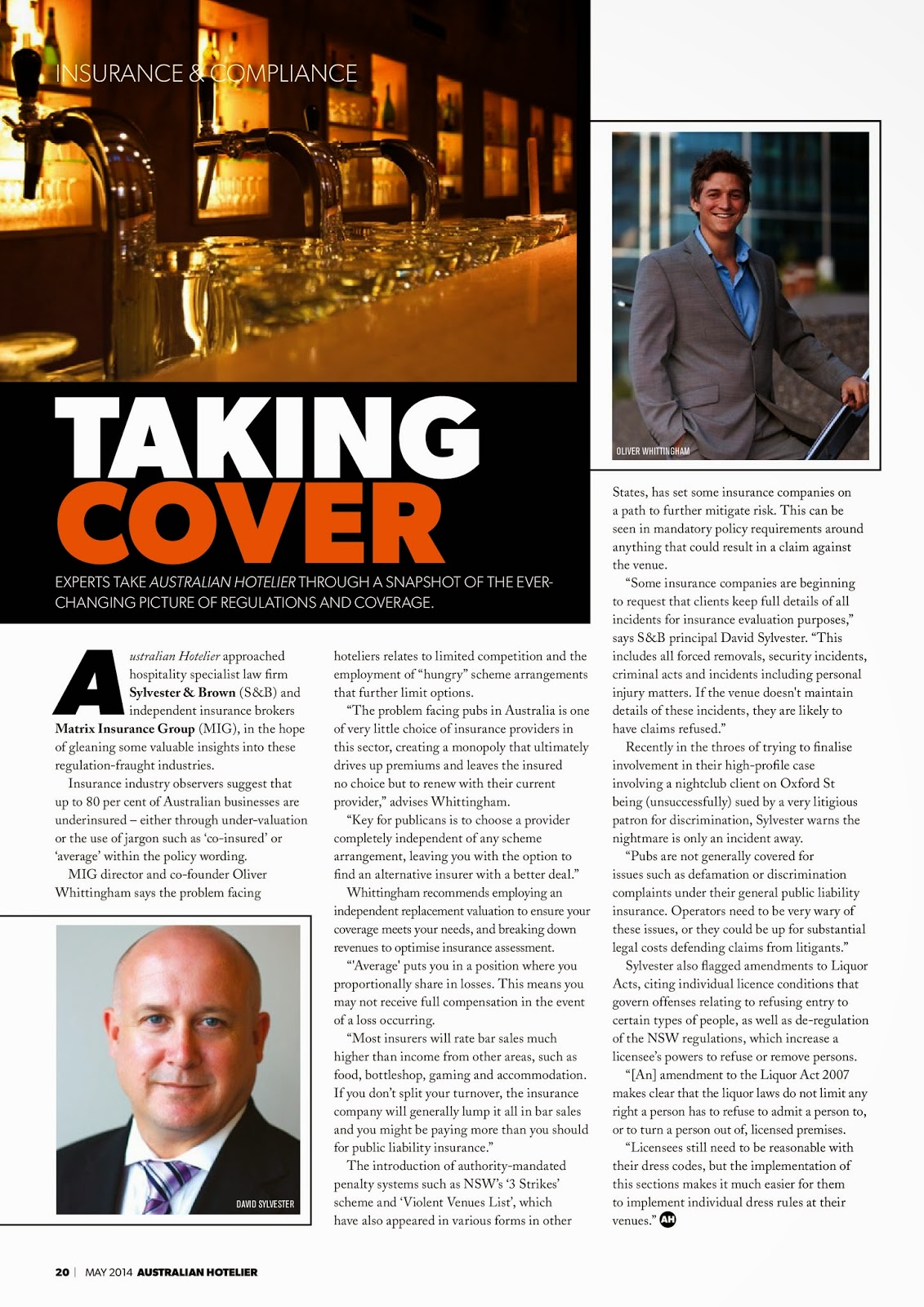 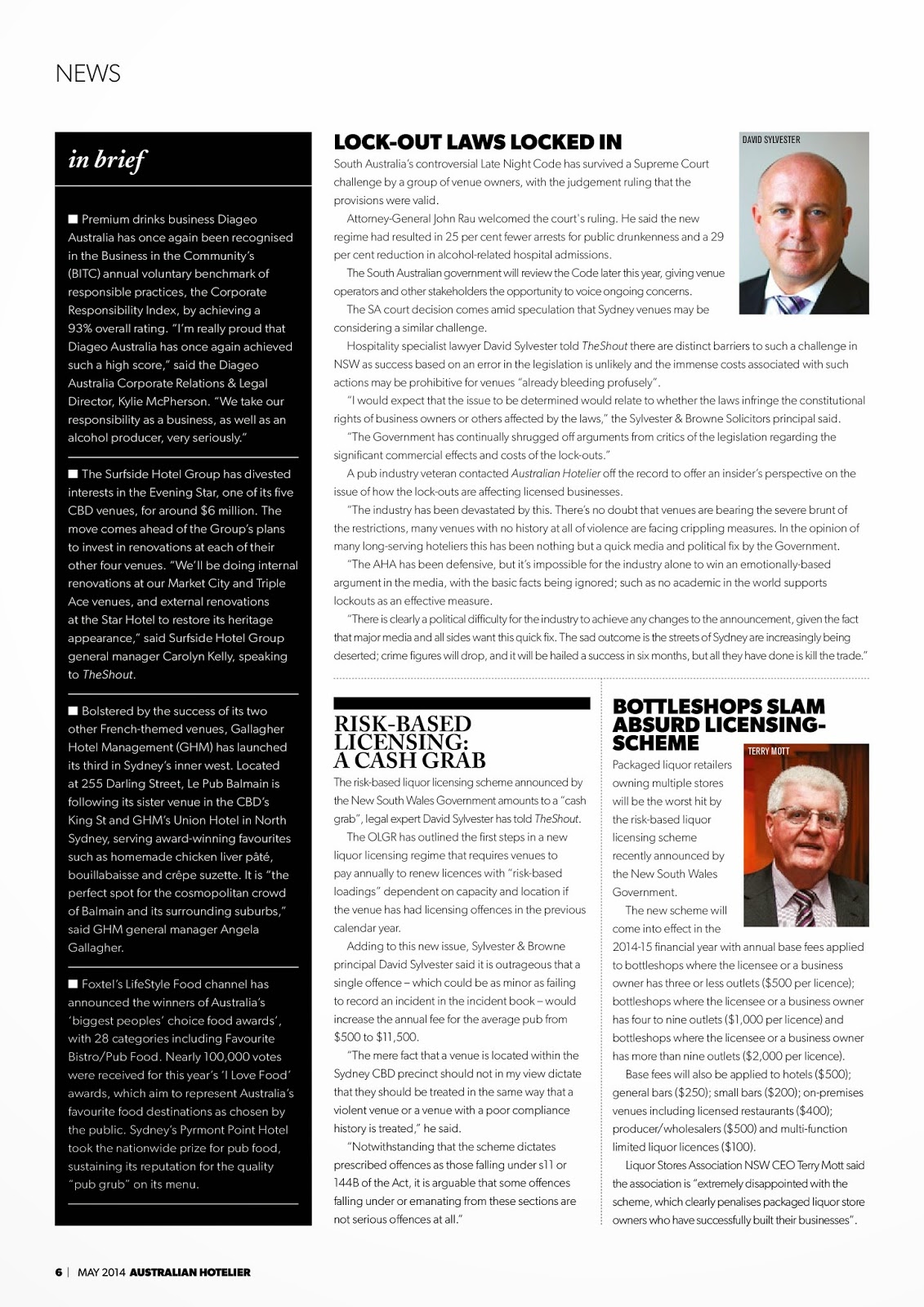 Posted by David Sylvester at 1:22 AM 3 comments:

The details of the long anticipated Risk-based licence fee scheme were released by the NSW Government and the OLGR last Friday the 11th of April 2014. The Scheme dictates that every holder of a perpetual liquor licence will be required to pay an annual risk-based licence fee. We hold the view that the scheme is unfair, unnecessary and has the potential to discriminate against hotels and venues by virtue of their location, trading hours and patron capacity.

According to the OLGR, the scheme is designed to provide venues with a financial incentive to adopt and maintain safe, low-risk practices, with a renewed focus on the Responsible Service of Alcohol, in return for a lower annual licence fee.  Additionally, "the scheme introduces contemporary best practice in liquor regulation into NSW and aligns with existing practices in Victoria, Queensland and the ACT".

All sounds great in theory doesn't it? However, the Government's attempts to justify the scheme fly in the face of their own statistics which clearly show that alcohol-related violence within licensed venues has dropped dramatically over the past two years. Aside from the lock-outs and alcohol sale cessation times, venues now have extra security, RSA marshals, sophisticated CCTV systems, incident registers and multiple inspections by law enforcement and regulatory bodies. Apparently, that wasn't enough to appease the anti-alcohol coalition, so now owners and operators are faced with the prospect of massive licence fee increases up to $24,000 per year.  It's also interesting to note that 12 months ago, the NSW Government weren't the slightest bit interested in aligning their liquor regulation practices with Victoria, Queensland or the ACT. Funny how things change, especially when you can generate massive funds through a so-called "risk based" licence fee scheme.

Take for example a venue within the Sydney CBD precinct with an unblemished compliance record that trades after 1.30pm, and has a capacity of over 120 persons. At present, a venue in that position would be hit with a standard $500 per year for their licence. Under the new scheme, if the venue trades after 1.30am, they are automatically hit with additional $5000 fee for no other reason than they have been authorised (under their existing licence) to trade til 3am. Now, let's imagine that in a large venue (150-300 people), one patron becomes intoxicated and is removed from the hotel by security personnel. Whilst being removed, the OLGR or Police identify that the person is apparently intoxicated and breach the licensee with 'Licensee permit intoxication'. Remember, this is a pub with an unblemished compliance history. The affect that this incident would have on the venue is enormous. Firstly, the compliance history loading indicates an additional fee of $3,000 on top of the $5,500 fee already imposed. That's $8,500. But it doesn't stop there. Then, if we add loading for the venue's patron capacity and location, another $7,000 is added to the fees. That's a total of $15,500. Again, the example we are using is that of a venue with a prior unblemished compliance record. Mr Premier or Mr Souris, please explain how the imposition of $15,000 in 'risk-based' licence fees can be viewed as anything more than a blatant cash-grab.  If the government are trying to put pubs/bars/nightclubs and other venues out of business, the new 'risk-based' licence fee scheme will certainly assist them to achieve their goal.

See below for a link to an article in The Shout online magazine today regarding the new scheme.

The OLGR calculator can be found here;

Notification of 'High Risk' venues within the Sydney CBD Precinct

Recently, the NSW Office of Liquor Gaming & Racing (OLGR) have sent letters to numerous licensees and/or licensed premises within the newly created Sydney CBD Precinct advising that pursuant to section 116B of the Liquor Act 2007 (the 'Act'), 'licensed premises'

(i)  on which liquor may be sold for consumption on the premises, and
(ii)  that are authorised to trade after midnight at least once a week on a regular basis, and
(iii)  that have a patron capacity (as determined by the Director-General) of more than 120 patrons

Notwithstanding that venues may be able to apply for an exemption (via the Regulations) in regard to the above restrictions, it is very important that licensees and venue owners familiarise themselves with the specifics of their current liquor licence and any restrictions and/or conditions that may have been imposed.

As the law currently stands (and as outlined above), although licensees of declared High Risk venues in the Sydney CBD Precinct are generally caught by both the lock-out and sales cessation restrictions, they are NOT automatically subject to other conditions that may be instituted by the Director (OLGR) by virtue of section 116I of the Act. Section 116I outlines that high risk venues may also be subject to additional conditions including the prohibition/restriction on the use of glass containers and bottles within the venue and serving high alcohol content drinks such as shots.

Sylvester and Browne Lawyers are concerned that some licensees/venues have been incorrectly informed by licensing Police that their venues are subject to the restrictions as set out in section 116I of the Act when this is clearly not the case. Our interpretation of the Act and the Regulations has been confirmed by the OLGR who are now attempting to liaise with their colleagues in the NSW Police Force regarding the error. If and when approached by NSW Licensing Police, licensees and venue managers should request details of the breaches alleged including the section/s contravened under the Act or Regulations.

Interestingly. the wording in the letters sent suggests that the OLGR and Police may be gearing up to impose additional conditions on some perceived high risk venues within the Sydney CBD Precinct in line with the Plan of Management for the Sydney CBD Precinct. As such, venue operators and licensees should remain vigilant towards managing conditions that may lead to alcohol related violence including the responsible service of alcohol. It is likely that any attempts by the OLGR or Police to impose further onerous conditions will be closely linked to intelligence gathered by both covert/non-covert surveillance and relevant incidents inside and in the vicinity of perceived high risk venues.

Should any licensees, owners or venue management require further advice regarding these issues, please feel free to contact us on (02) 8251 0096 or via email enquiry@sylvesterbrowne.com.au.

We have been receiving numerous enquiries of late regarding the Special Licence Conditions applicable to premises/venues within the Kings Cross precinct.

I have inserted a link (below) to the OLGR's Fact Sheet regarding the new conditions.

Venue managers and licensees within the Kings cross precinct are strongly encouraged to review the attached link to ensure compliance with the new licence conditions.

Should you have any queries regarding the new conditions, please feel free to contact our office on (02) 8251 0096.

Please see the attached link for an article in The Shout magazine regarding the Government's proposals to fight alcohol-related violence in Sydney's CBD.

** Further updates on the way over the next few weeks.
Posted by David Sylvester at 6:26 PM 1 comment: